What are Germany's best beers? If you check the internet, you will find several lists that pretend to answer the question. And you will find that some of these lists always comprise the same names - for quite a simple reason. The lists are from the U.S. and they only cover German beers available in the States.  If you consider that not more than 40 German breweries ship beer to the U.S. and that only half of them have a relevant distribution it becomes clear that these lists do not answer the question.

So here is our gallery of the best German beers, based on a meta-analysis of twelve beer-rating sites, mainly from Germany. It is not a over-all ranking; we show the best beer for the major styles. More Detailed rankings by style are on the right. Click on an icons to get more information.

Apart from the major styles there are some styles in Germany that have a very low market share. These are Märzen, Porter, Kräusen, Weizenbock, Gose, (echter) Zoigl,  Rauchbier (smoked), Roggen (rye) and other beers with rare malts (spelt, emmer), and Berliner Weiße. 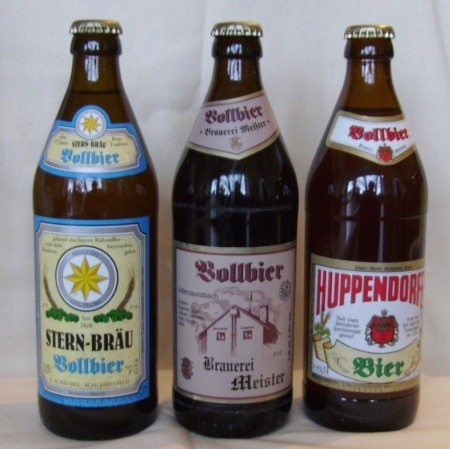 Vollbier is a category of beer according to the German excise act for beer. Vollbier has a gravity of 11.0 to 15.9°P, which is 3-6% ABV. 99% of all beers fall into this category (if you do not consider non-alcoholic beer). The beer tax is graded according to the category and the size of the brewery.

The category must not be printed on the label. The labels show the beer style, like Pils, Weizen, Bock etc. Some small brewery still put Vollbier on the label. This is pure nostalgia and might also indicate that they have a very limited range of beer styles. Quite often, a label saying Vollbier is a good indicator for high quality beer, because it comes from a small brewery that is focussed on this one beer for a very long time.

The category with higher gravity (≥16°P, > 6% ABV) is call Starkbier (strong bier, the style is Bock and others), beer with low alcohol (<3% ABV) is called Schankbier.

And by the way, what does Landbier mean?

Just like Vollbier, Landbier is not a beer style. Landbier means beer from the countryside and is a term created for marketing purposes. Mostly it is just a Lager, a Helles or a Dunkles, the term Landbier it does not indicate quality at all.